Happy Valentine's day, friends! I hope you have a wonderful day, whether you are celebrating with husbands, family or friends! :)

We're keeping it pretty low key tonight and sticking with our Friday night tradition of homemade pizza, but I'm making these cupcakes for dessert:

I'm debating about using the meringue icing or making the vanilla one (adding the strawberries) that I have in Danielle's cookbook. Some of the comments said the honey taste was more noticeable than they'd like. Anyway, they look delicious!

Some other Valentine fun - a few of things on Pinterest:


And, lastly some Valentine fonts that I've downloaded since I am a serious font junkie. I think reading something in Times NR or Arial is part of my purgatory, haha. :) You can click on the names found below to find a link if you'd like to download your own copy. They are all freebies. :) 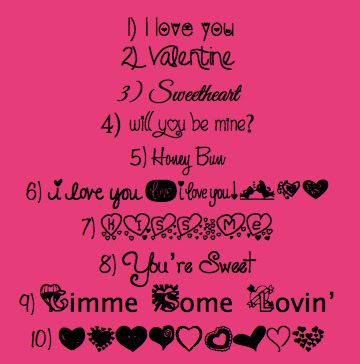 There are also some great free fonts on the website Kevin and Amanda.

C loves helping in the kitchen - he loves to lean over and sniff the pot when something is on the stove, and he especially loves making cookies! And eating the batter. :) And checking them out in the oven when I turn the light on. My sister R was here this weekend and she took a few photos of our fun! 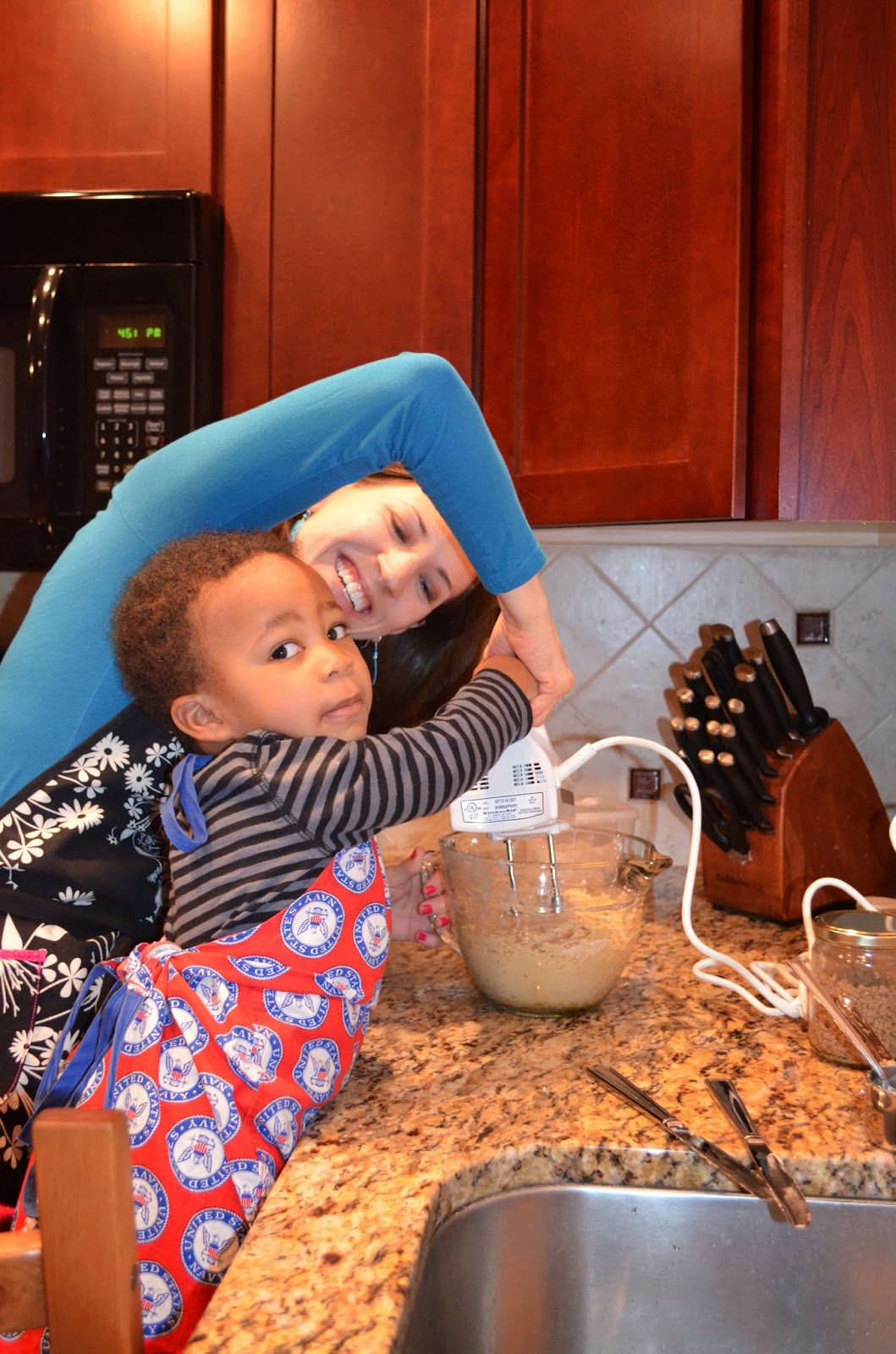 Wearing Daddy's apron - I'm working on making him his own! 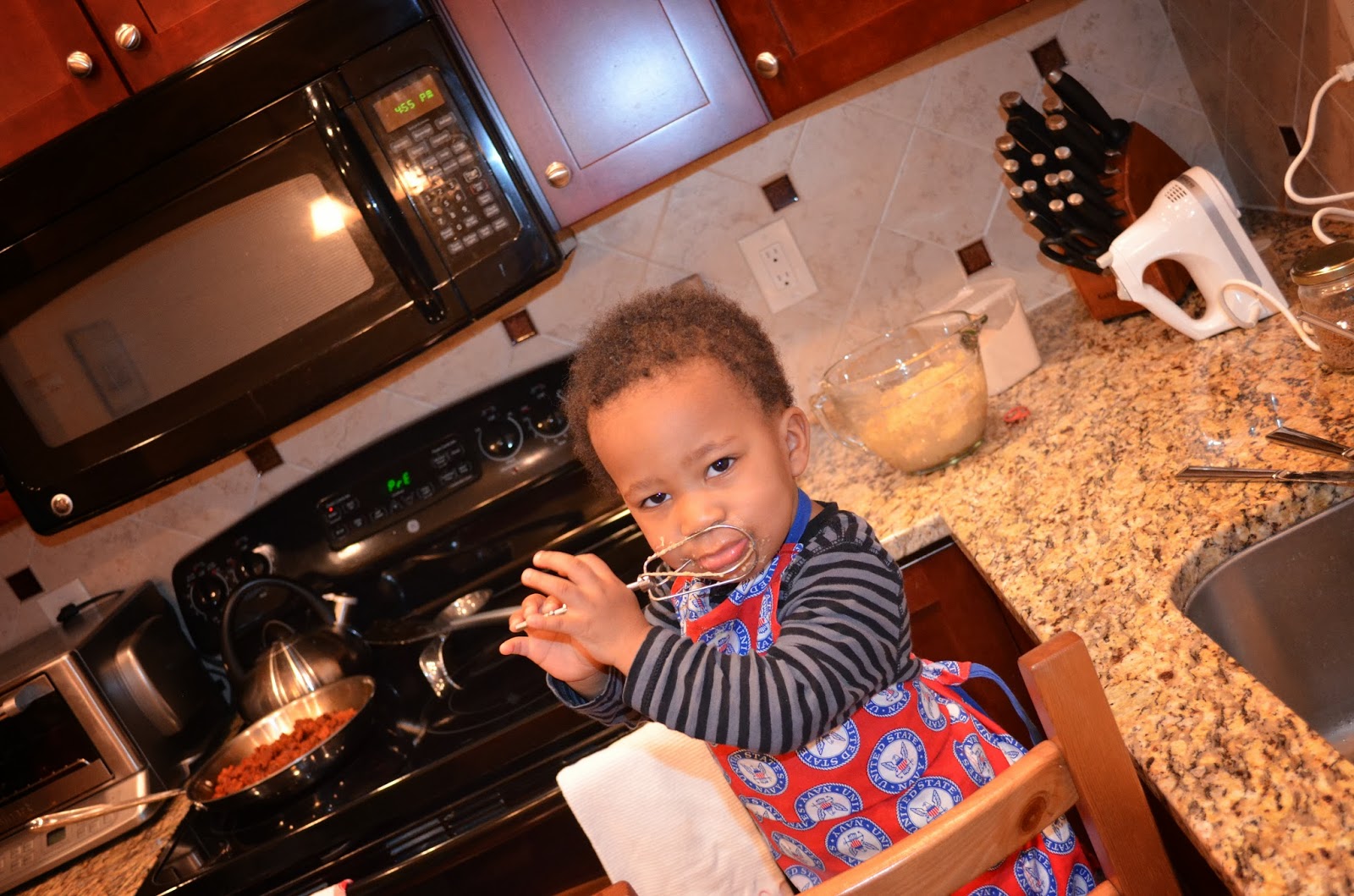 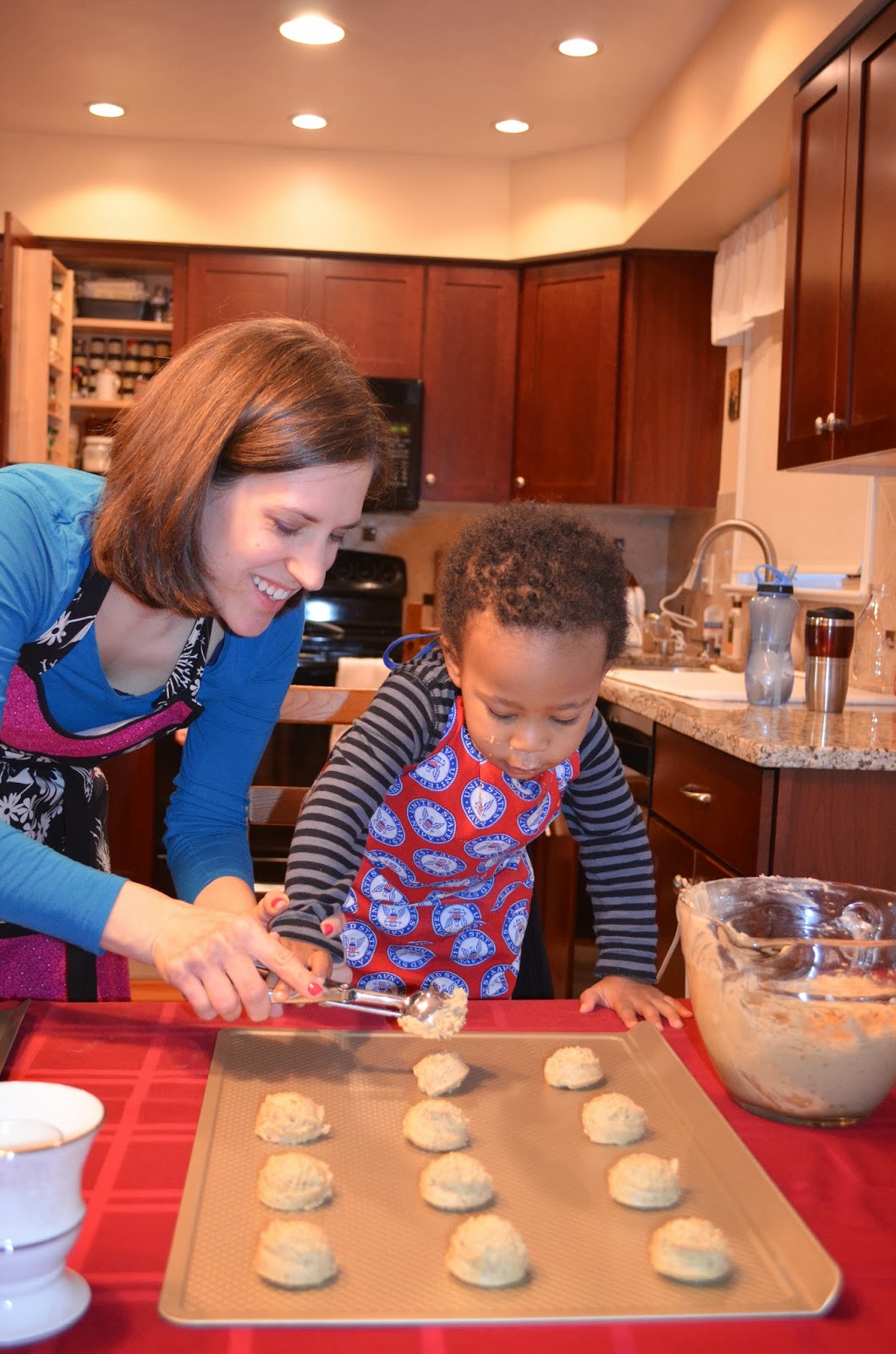 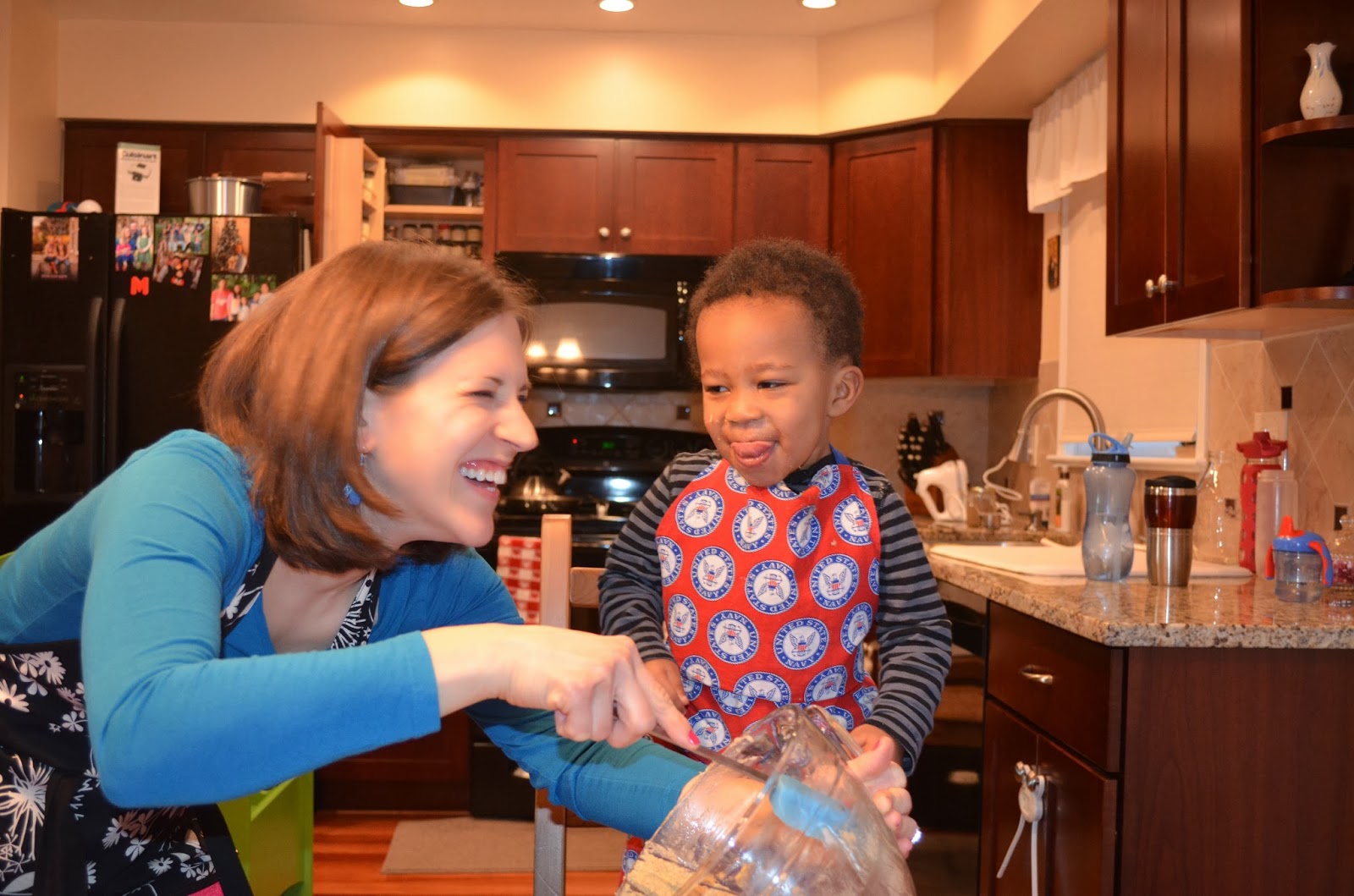 He kept sticking his tongue out and giggling! 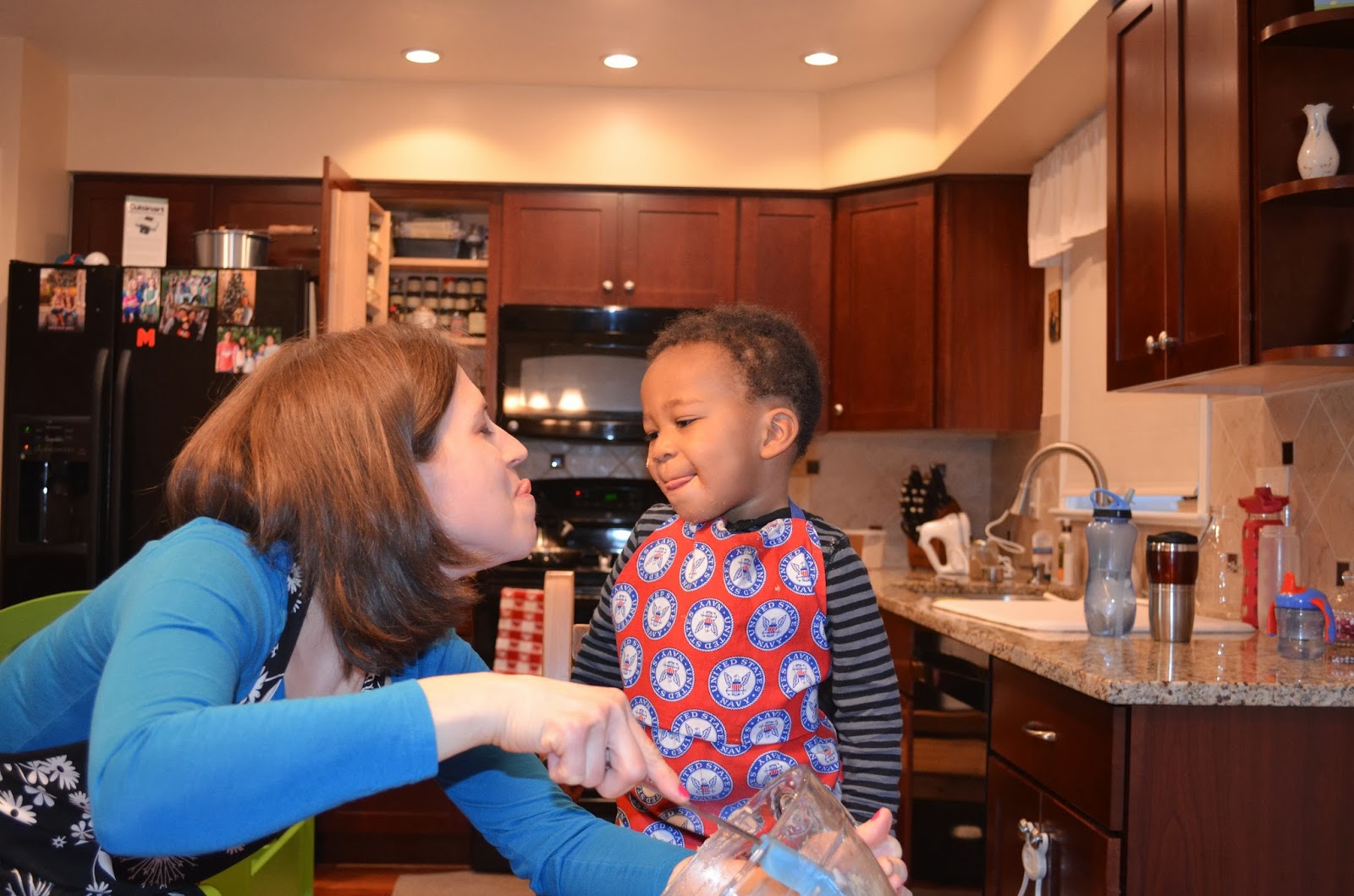 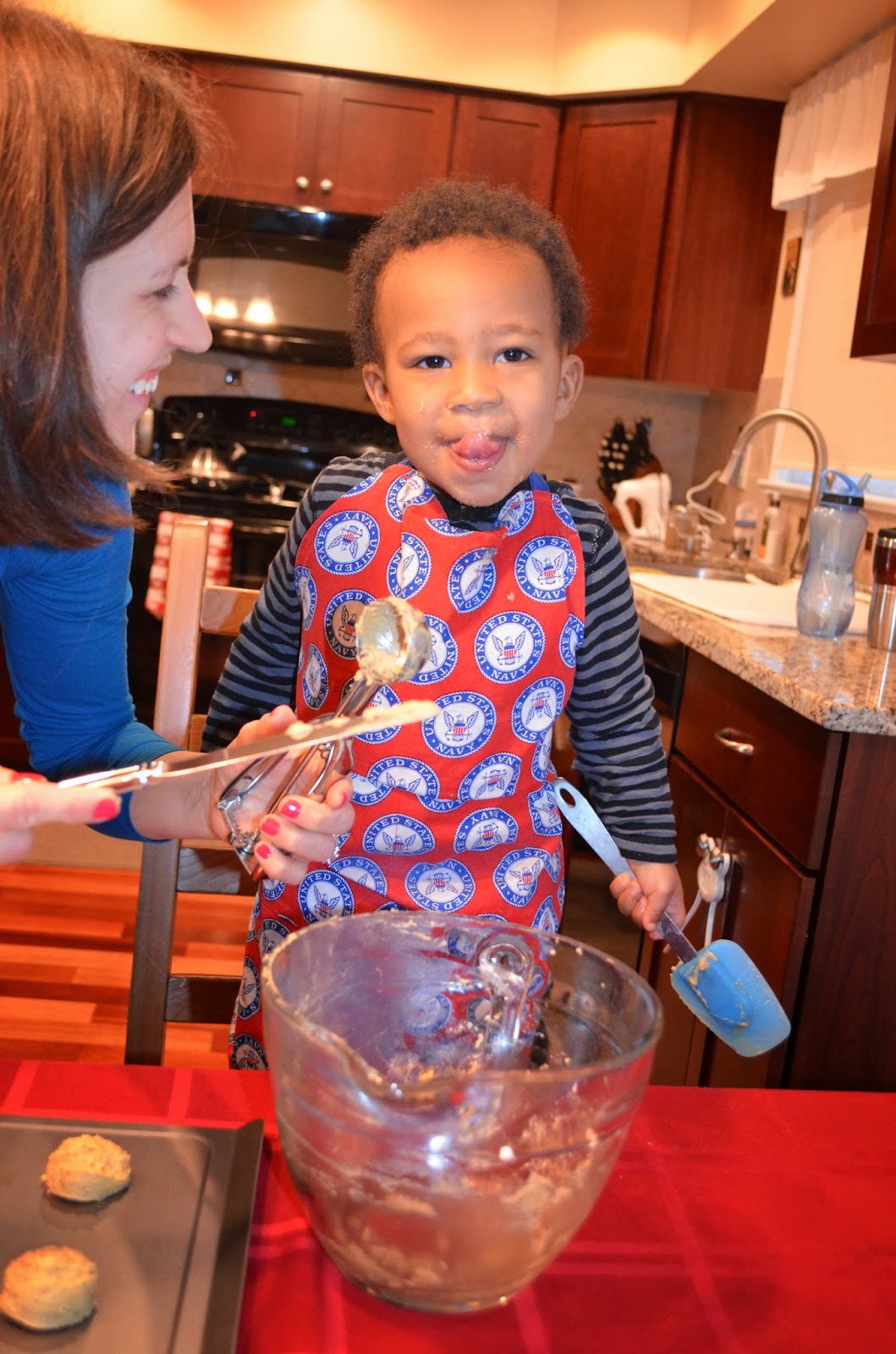 These cookies were made using sunbutter - a peanut butter substitute. Honey, not sugar was used as the sweetener and they are delicious! We've already made them 4 times, and C gets very excited when he sees the cookie jar on the counter! :) I used the recipe from the Against All Grain cookbook, but here is a similar recipe on the author's website). Mine were plain since I can't eat chocolate. And yes, as mentioned on the site - my cookies did have a bit of green in the middle due to the sunbutter and baking soda, haha. I think I'll omit the lemon juice entirely next month for St. Patrick's Day. :-D

Yes... that's right. I hesitate to even hit publish on this post, because it really seems like just a dream. We got a call a week ago that a birthmother had chosen us to be parents of her little girl. In shock and amazement, I let the sweet ladies from my book club clean up the kitchen and take care of the babes (there were 4 little boys all around C's age running around) while I called family to share the news, ask for help (we weren't sure C would be allowed in the hospital with us so were looking for friends to watch him, but it turns out he was allowed) and get some things packed. DH arrived home as soon as he could (it was out of state and we were needed there as soon as we could get there). Less than 5 hours later, we arrived, signed the paperwork, met the birthmother and met our "daughter."We held her briefly - we hadn't packed dinner, other than some snacks and food for C, and needed to get back on the road so that C could get some sleep. (He napped relatively well on the ride there.) My parents arrived just before midnight. I think I got to bed around 2:00?! We were up to go to Mass at 8, then made a run to BRUs for some formula and cute girl clothes. Oh, and newborn diapers. :) We had a few other things we had to take care of before we got on the road again. When we were just about to the exit for the hospital, we got the "other call"... the one no adoptive parent ever wants to receive. "She has changed her mind. She is going to parent."

DH and I thanked the Lord for a few little things - mainly, that we hadn't decided on a name. We had it narrowed down, but weren't sure. I didn't order a bunch of supplies to make the homemade formula (not that I can't use it for the next baby, but still, we hesitated and I'm glad it won't be arriving this week in the mail). I didn't order a bunch of things from Etsy. I could return a bunch of things to the store. And that we had so many people praying for peace for us, that we felt it. We barely had time to process it. It was almost like we visited a friend in the hospital, saw the baby, and came home. And that was it. There are so many couples we know who have had a failed adoption much later in the process. We never had custody of her. I thank God for protecting our hearts. Next time He may ask more, I don't know. On the ride home we simply said to one another - we have each other, we have C, and we trust God with our family. I never thought my infertile self would be able to say that and mean it. We trust God with our family.

Adoption is a very tricky thing to pray for. In a perfect world, there would be no need for adoption because birthparents would be able to provide for and care for their children. There would be no infertility.

It's not a perfect world.

There is infertility, and there are children who need parents other than those who gave them life. So we pray for the next child who God asks us to parent, whenever he or she comes along.

We thank Him for the gift of that sweet and precious little girl. She was not meant for us, so we will pray for her and her mother. I ask you to do the same.
Posted by Isaiah 55:8-9 at 9:00 AM 14 comments: 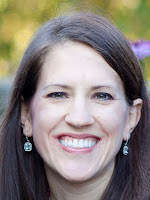 Isaiah 55:8-9
Welcome! I love my Catholic faith, my husband, being a mom after years of infertility, adoption, music, books, organizing and cooking. Thank you for stopping by!

Why I love my husband